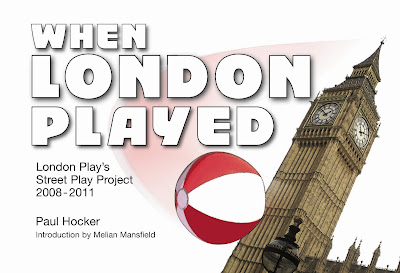 Here's a book I'm wish listing. When London Played is the book from a Lottery funded project that created 100 Street Play events across London.

"One child summed up the transformation to his road in Haringey, when the traffic stopped and the play started;

‘There were no cars, so it was safer and bigger and everyone was together in the street’."

Add that quote to Tim Gill's latest blog post about news consumption, where he writes:

".......the facts show that the strangers who pose the greatest threat to children are those behind the wheel of a car. In 2008 [pdf link] for instance, 91 children under 15 were killed on the roads. By comparison, there were 23 homicides (and as I show in No Fear, most child homicides are committed by parents and members of the extended family, not by strangers). The comparative lack of media coverage of, or debate about, road danger is itself a telling example of news bias."

And we have a fairly compelling argument against cars..... Time to rethink the public realm.
Posted by Kay at 4:39 AM