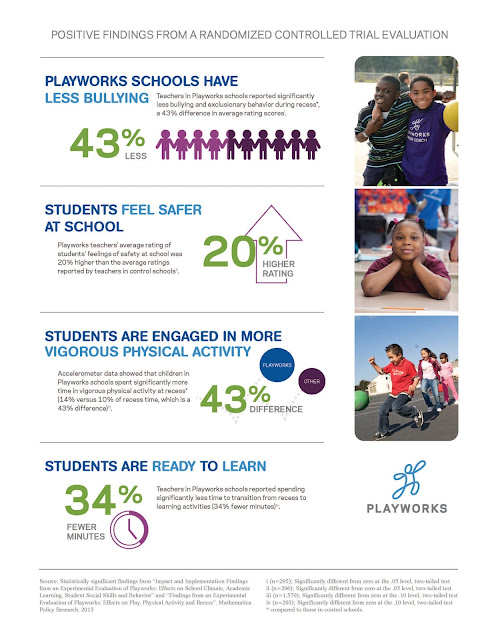 I have blogged about Jill Vialet and Playworks before but it's always nice to see what they are up to.

The infographic above is the result of a new study released from Mathematica Policy Research and the John W. Gardner Center at Stanford University.

Oh and Jill Vialet wrote a good piece for GOOD about bullying, worth reading.
Posted by Kay at 1:00 AM 2 comments:

A Manifesto for Higher Learning

Over at the Design Observer, Andrew Howard posted his manifesto that he shares with his incoming graduate students each year.


Excellent stuff.
Posted by Kay at 2:00 AM No comments: 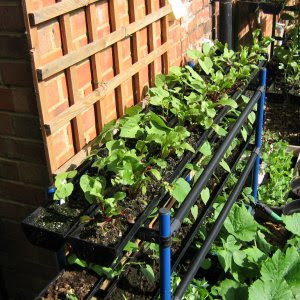 The Centre for Sustainable Technologies is a social enterprise that helps more people get into growing food.

Co-founder Lynette Warren has written a blog post over at the RSA about her RSA Catalyst-funded project to create vertical allotments.

It's called ‘GutterGrow’ and it was designed to be a flexible unit to grow vegetables and plants on balconies, small patios or any confined space.

Why video games may be good for you

Here's something I struggle with, my kids and video games..... This article over at BBC Future is very interesting and suggests that virtual violence triggering aggressive thought and anti-social behaviour is only a very small part of the story.


"A growing body of research is showing the flip side, though – video games can help people see better, learn more quickly, develop greater mental focus, become more spatially aware, estimate more accurately, and multitask more effectively. Some video games can even make young people more empathetic, helpful and sharing. As public debate on the subject is often highly emotive and polarised, and as more and more of us are becoming gamers, researchers say it is important to move beyond the generalisations that characterise much of the discussion."
Posted by Kay at 12:28 AM No comments:

Why the world is awesome in 60 facts

BBC Future posted this great video.
Posted by Kay at 11:46 PM No comments: 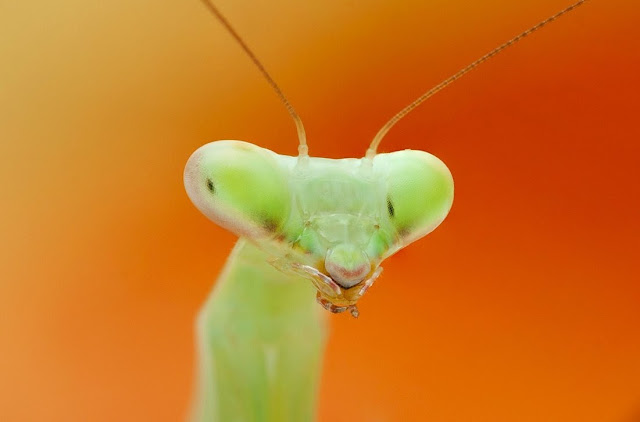 Amazing macro photography of insects by Adam Tomaszewski. Compelling and disturbing at the same time.
Posted by Kay at 6:51 AM No comments:

(From the best Doctor Who...ever, in my humble opinion.)
Posted by Kay at 2:10 AM No comments:

The Secret to Finland's Success With Schools, Moms, Kids—and Everything

Very interesting article over at The Atlantic about Finland how it compares to America. Well worth reading.

"..........One advantage Finland did have, however, was enlightened policies towards gender. The country focused on beefing up child and maternal care in large part because women were at the core of Finland's independence and nation-building efforts at the turn of the 20th century. Finnish women were the second in the world to get the vote in 1906, and they were heavily represented in the country's first parliament.

"You have a state system that was built on issues concerning Finnish citizens, both men and women, rather than women's rights," she said. "Government was created in this equal footing for men and women.""
Posted by Kay at 1:50 AM No comments:


This is a fantastic project by Gary Grant of Green Roof Consultancy.

To promote sustainable drainage systems and combat flooding, this hotel has installed 10,000 plants recommended to attract wildlife such as bees, butterflies and birds to the urban environment and it has been designed in an attempt to reduce local environmental issues such as surface flooding and air pollution. It will be irrigated by harvested rainwater caught on the roof. 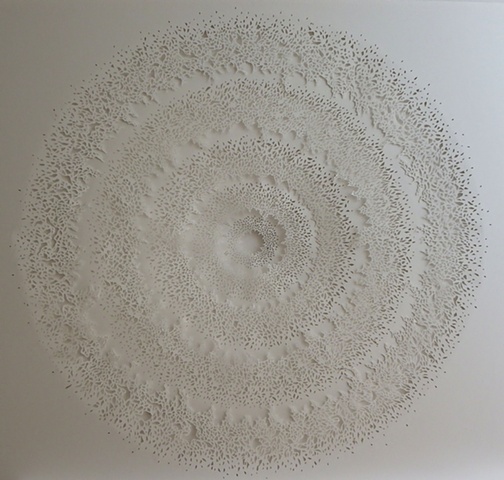 "The tree which moves some to tears of joy is in the eyes of others only a green thing that stands in the way. Some see Nature all ridicule and deformity...and some scarce see Nature at all. But to the eyes of a man of Imagination, Nature is Imagination itself."

Julia Cameron and The Artist's Way

“Every child is creative,” says Cameron, “And every parent is creative. Your child requires joy, and exercising creativity, both independently and together, makes for a happy and fulfilling family life.”

Very exciting.
Posted by Kay at 1:00 AM No comments: 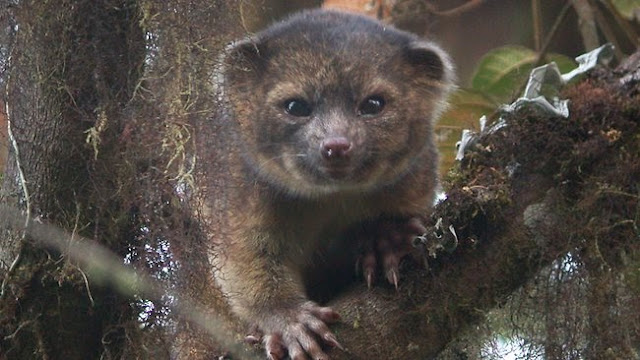 Let us all welcome the Olinguito, the first new carnivore identified in the western hemisphere for 35 years.....

The story behind it is that it seems to have been a case of mistaken identity, many people thinking it was an olingo and there were even failed attempts to breed it in a zoo, as a mate from a different species was offered and it wasn't having any of it.

And while we are on the subject of LEGO...... the CEO of the LEGO Foundation, Randa Grob-Zakhary, spoke at the 2013 LEGO Idea Conference in April on creativity.

"On average, 98% of three year olds have genius levels of creative thinking. That means almost everybody here today was a creative genius as a child. Between 0-3 you developed in a way that meant your brain constantly took new and different approaches to the issues you faced in the play pen and the high chair. But ask yourself – do you think you’d score that well if you were tested today? Would you consider yourself a creative genius? You may well be, but the reality is that just 2% of people over the age of 25 retain that level of creativity."

The International School Of Billund & LEGO

This is a school I know my boys would love to go to, one initiated by The LEGO Foundation. The International School of Billund will provide creative, high quality academic programmes to students aged 3 to 16 years.

Their mission statement: "We guide and stimulate children to become ambitious lifelong learners who achieve personal fulfilment and who will make positive contribution to our ever-changing world. We believe this is consistent with the IB mission statement, which focuses on the idea of creating a better world through education."

Here's hoping they do wonderful things there (which I'm sure they will) and other schools around the world follow suit.
Posted by Kay at 4:29 AM No comments:

Shot@Life is a United Nations Foundation movement to protect children worldwide by providing life-saving vaccines where they are most needed.

"By encouraging Americans to learn about, advocate for, and donate to vaccines, Shot@Life aims to decrease vaccine-preventable childhood deaths and give every child a shot at a healthy life."

There are many ways to get involved, check out their website. 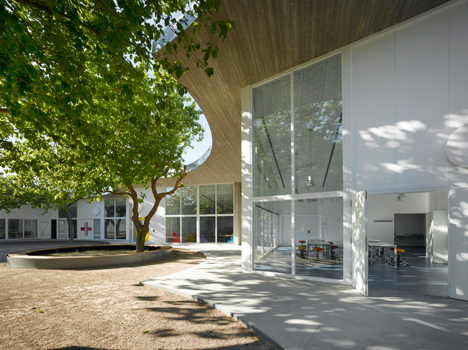 Head over to dezeen for more photos.
Posted by Kay at 8:00 AM No comments:

An animated gif of one year of seasonal transformations on Earth. By John Nelson. 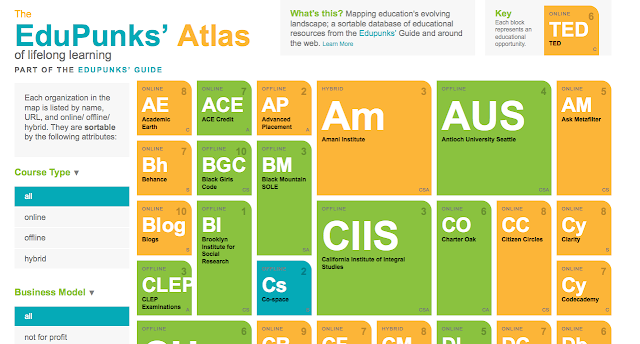 I'd not heard of this book before but "The Edupunks' Guide was written to be a first-of-its kind resource for the future of education: a comprehensive guide to learning online and charting a personalized path to an affordable credential using the latest innovative tools and organizations. This guide is full of people, programs, and ideas that are part of the future of learning."

They have also released a lovely looking interactive map, a sortable database of educational resources from the book and around the web.

Via Swissmiss.
Posted by Kay at 1:28 AM No comments:

Block by Block, Brooklyn’s Past and Present

Beautiful interactive map of Brooklyn by Thomas Rhiel over at BKLYNR. Each block has been plotted and shaded according to its year of construction.

I am thinking about how that could apply to mapping nature and the urban forest in a similar way. Just something I've been mulling over, thinking about finding a way to either compare cities and their urban forests or look at how a city has lost it's nature over time...... 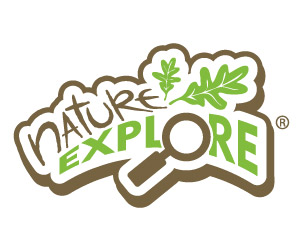 This is a nice project, Nature Explore is a collaboration between Arbor Day Foundation and Dimensions Educational Research Foundation, with a goal to support your efforts to connect children with nature.

So, head on over if you have need of help or inspiration.


It works or it doesn't.

Build something that doesn't fall down. On time.

But in fact, great projects, like great careers and relationships that last, are gardens. They are tended, they shift, they grow. They endure over time, gaining a personality and reflecting their environment. When something dies or fades away, we prune, replant and grow again.

Perfection and polish aren't nearly as important as good light, good drainage and a passionate gardener.

By all means, build. But don't finish. Don't walk away.

Over at Treehugger is an article announcing that the Costa Rican government has announced plans to close its zoos, freeing creatures from their long captivity.

“We are getting rid of the cages and reinforcing the idea of interacting with biodiversity in botanical parks in a natural way,” said Environment Minister René Castro. “We don't want animals in captivity or enclosed in any way unless it is to rescue or save them.”

While I understand that zoos help with conservation, education and  future generations involvement in nature, I always come away from a visit to one feeling sad. So, this I like very much.
Posted by Kay at 3:37 AM No comments: 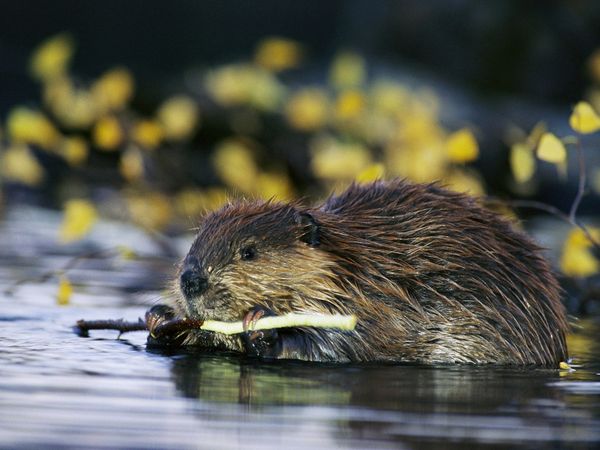 It's almost the weekend and as I've been reading "What has nature ever done for us?" about carbon capture I thought a post about how wonderful beavers are would be appropriate.

According to Ellen Wohl of Colorado State University in Fort Collins, "Beavers offer a mechanism of carbon storage," by building dams and creating wetlands where carbon is in the sediment and organic matter. (From an article over at the New Scientist).

I know that there is also a great project in Scotland, where they have reintroduced beavers back into the wild and it seems to have been a huge success.

So, bring them back, what's not to love?

A little off topic but if you are someone who worries about where the clothes you buy for your family come from and if they are made in a sweatshop by underage workers, then this foundation is for you.

"Fair Wear Foundation is an independent, non-profit organisation that works with companies and factories to improve labour conditions for garment workers."

Check out their page of brands that are members of the foundation.
Posted by Kay at 1:32 AM No comments: