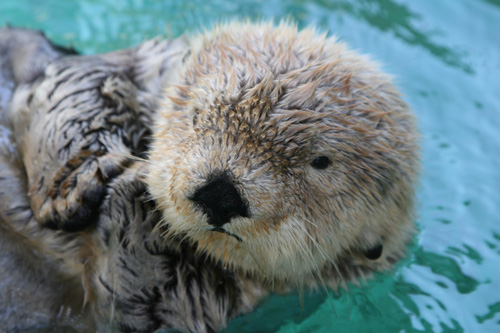 Possibly my favourite animals on the planet (aside from my lovely cat, the clue being that both have a very high cuddly factor) and apparently extremely useful as well....

According to a study by Brent Hughes of the University of California, Santa Cruz, they have returned to the Pacific coast in great numbers and the decline of endangered seagrasses in the region has been reversed.

Read more about it in a fascinating and witty article by John Finnemore at the Guardian, who also says;

"My favourite fact about sea otters, thanks for asking, is not that they use rocks as tools to break open shellfish on their chests, but that they then put this tool back in their pocket. Sea otters have loose pouches of skin in their armpits, and they store food and tools in them. How can you fail to admire an animal that not only uses tools, but has evolved itself a tool belt?"
Posted by Kay at 12:00 AM